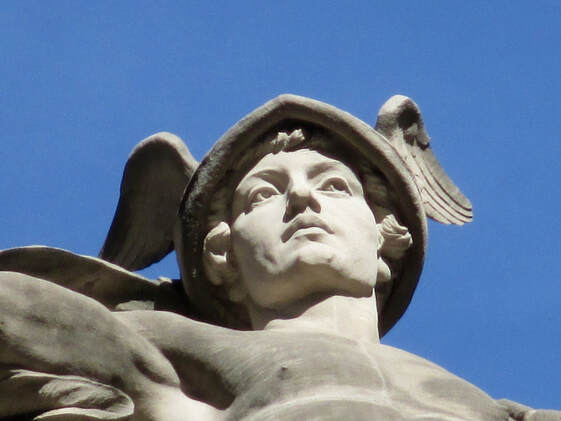 A short story encapsulating Mercury across the ages.

In ancient times, a dozen families formed a village of mud homes and thatch roofs in the middle of a vast wilderness. Though their lives were simple, the people had fresh water and adequate protection from the elements. It was a start.

After two generations, a man emerged from the woods who had come from far away.  He developed warm friendships over several decades, shared wisdom gleaned from many travels, and eventually became a respected leader. Toward the end of his life the villagers surprised him with a ten foot relief of the visitor carved into a nearby granite cliff. Grateful for the impact he made on their community, they honored him with a festival. That night he fell asleep staring at the stars, basking in love.

A thousand years later the rural village had become a large town. Oral tradition kept alive the tale of “The First Visitor,” passing his wisdom from generation to generation. “The traveler emerged, from far beyond the horizon,” began the well-worn story retold at his annual festival. However, the first visitor hadn’t been the only visitor. In the thousand years since his death, the village had carved a half-dozen additional images of women and men into the granite cliff. The townspeople cherished the wise travelers who contributed so much to their growing community.

One morning an elderly mason stood before the first visitor’s rough granite form. For some reason it caught his eye differently that day. “No, no,” the mason muttered, sliding his hand across its torso. “That’s not quite right.” The gray-bearded man felt compelled to return in secret. He later brought simple tools to smooth out the form, deepening it slightly, until the visitor seemed to stand apart from the cliff wall. After several nights' work, the mason stared upon the ten foot tall stone visitor in the light of a full moon, and cried with joy. He returned home, telling his family that he could now die in peace, and days later he did.

Across another thousand years, the large town had grown to a small, thriving city.  Tradesmen carried stories of the ancient visitors over sprawling dirt roads to nearby towns. A dozen torch-lit carved figures adorned the cliff surface, with a landscaped area hosting a temple. Most days, men and women sat in small groups beside each form, excitedly discussing the visitors' aspects and insights.

One afternoon an aging artist strolled the gardens to peruse these figures for the first time. When he heard a group discussing ideas and stories beside The First Visitor, he stared at the granite form in a trance. The water pooling in his eyes sparkled. That night he lay leaning on the carving, finally falling asleep beneath the stars. He returned for three nights, shaping more of its surfaces, granting the stone giant more depth. His skills made for quick work, nearly separating it from the granite wall entirely. The artist returned home, completed numerous creative pieces inspired by this experience, and eventually passed away a happy man.

Again, a thousand years passed. The city had been through wars, had changed hands numerous times, and vandals marred its granite heroes. The temple destroyed centuries ago was now only a scatter of weed-covered stones. Still, the city’s legends and lore clung to life, like cinders refusing to go cold. Eventually, a few core principles sparked within the exhausted population, rekindling a few small cults who safeguarded scraps of wisdom through time and the ravages of war.

One evening a curious farmer traveled to the cliff wall to see what he might see. His warm eyes hugged the first visitor's stone face, which he hadn't seen since he was a boy. He found himself surprised by how familiar the visitor felt. Then, coming out of a daydream, he smiled. “You’re in need of some attention, now, aren’t you?”

It was rare for anyone to visit the cliff these days, which enabled him to work slowly and thoughtfully in torchlight. The farmer noticed the other visitor sculptures had also received alterations over the past three thousand years. He chiseled away The First Visitor's last connection to the stone wall, freeing the large figure to produce the cliff’s first standalone statue. His granite form was smoother and more detailed than ever before. The joyful farmer told his wife what he had done, and they held a large celebration beneath the night sky. The farmer spent the remainder of his time on the planet carving a beautiful life with family and friends.

Another thousand years passed, and the city had grown to a metropolis. Its twelve visitor statues traveled the world, exhibited in numerous museums for decades. Now they squeezed into a relatively small chamber of the city’s historical museum, surrounded by video screens relaying their ancient stories. Few people visited these ancient granite forms anymore. Although their influence in the city was well-established in the history books, and they had provided pivotal inspiration to the city’s population across thousands of years, these stories were now considered myths of a once-primitive people.

This museum offered free admission on a single day each year, which a particular nineteen-year-old man living on the streets had been waiting for. In the dead of night he hosed himself down in someone’s yard to prepare for the big day. He trimmed his beard, wiped down his shoes, and put on clean clothes that waited in a plastic bag for weeks. Finally the young man's image held still in a fast food restaurant’s filthy bathroom mirror.

That morning he was, of course, the museum's first visitor. He wandered the huge building, his eyes poring over display after display, thrilled to finally absorb the world's ancient treasures. After an hour he stumbled upon a statue beneath a sign: The First Visitor. The young man looked at the ceiling decorated as a starry night sky. His eyes went wide.

“No,” he whispered. “It can’t be.” He feverishly read through The First Visitor’s info screens. Everything within him resonated, then screamed. He bolted past the velvet ropes and clutched the granite legs. Fragments and feelings from a place deep inside rushed through him. He sobbed in disbelief.

“I’m a nobody!” he protested, challenging the glittering plastic stars. “This can’t be!” His grip loosened as he began giggling. That's when a security guard approached, and got down on one knee, presenting a calm but assertive presence. “Sir, would you care to explain what’s going on, here?”

The young man stopped laughing immediately, gave a sideways glance, and strengthened his grip. An unbelievable series of images and stories flowed through his mind, and they could only turn this discussion into complete absurdity.

Joy, confusion, rage, hope and a hundred other emotions coursed through him as he realized his predicament. Fresh waves of inspiration and insight mocked visceral reality: he was a homeless man in an emotional breakdown, wrapping himself around a museum piece. He fought to keep himself together, but there was no holding back the giggling. When he finally broke free from waves of surreality, he realized he didn't know how long he'd been staring into the guard's dark brown eyes. The tragedy of his current life flooded in, allowing him to compose himself. He took a long, deep breath as his hand explored the polished leg.

“No, dude. Seriously. It’s…it’s not even…” And once again waves of story and imagery smashed down on him.

Desperately desiring a rock in his private storm, every muscle squeezed around the statue. The painful irony soaked his face with tears, and all his knuckles went white once more before he burst into rich belly-laughing that seemed to echo through the entire building for over a minute. Even to himself he sounded like a madman. They must be certain he was on drugs, he thought, making the situation more ridiculous and sending him into another fit. This is when several guards entered the chamber with a straightjacket, and peeled him from the large statue. He smiled, his malnourished body nearly limp with exhaustion as they cinched the straps then dragged him by his collar backwards across the smooth marble floor.

His eyes locked on the statue just before they turned him into the hallway. It was then the young man saw that his real work had only just begun, and he radiated sheer joy. "What a fool!" thought one of the security guards.

​“What a ride!” yelled the young man. Inside, the museum’s patrons exchanged glances, mocking him as they kept one ear toward the parking lot. They heard his voice one last time before the slam of a van door cut him off.
​
“I'm finally free!”
For all the gods and goddesses playin' the game